Lacan’s notion of the Mirror-Phase (or stage) is derived from Freud’s theories of narcissism and studies of child psychology and development. It refers to the period in which the ego is formed in childhood.

Lacan reworked Freud’s developmental model the basis for this being their agreement that infants have no sense of self or identity between themselves and their mother – that is, between Self and Other. Like Freud, he proposed three stages of development from child to adult:

During the Real stage all of the babies needs are satisfied, there is no absence, loss or lack. Between 6-18 months the baby begins to distinguish between the body and everything else in the world. The idea of the ‘Other’ results from the realisation that it is separate from the mother. This creates anxiety and loss – the baby shifts from having needs to having demands which cannot be satisfied with objects. The baby has the mistaken sense of itself as a whole person when recognising their image in a mirror. This creates the ego and sense of self – the mirror stage is also the realm of the Imaginary. Our sense of Self is built by misidentifying with the mirror image – a perfect self with no insufficiency or ego ideal. Following the mirror stage when the baby has formulated a sense of otherness, they enter the Symbolic which is the realm of culture and language. As humans become speaking subjects they designate themselves by the ‘I’ that was discovered in the Imaginary. They must obey the laws and rules of language which Lacan terms the ‘law-of-the-father.’ A notion which links to Freud’s theories of Oedipus, Electra and castration complexes. (D’Alleva, 2012: 96-7)

The mirror-phase was also based on studies carried out by Henri Wallon in the 1930s which compared the reaction of young children on seeing their reflection with that of chimpanzees. The humans were fascinated while the chimpanzees were uninterested which led Wallon to conclude that the babies had recognized the image in the mirror as their actual selves. (Buchanan, 2010: 322)

Lacan proposed that between the ages of 6-18 months, by looking at their own mirror image, babies began to build their ego and become self aware. However, the infant mistakenly sees itself as independent and apart from others in the world despite lacking motor coordination and skills: they see both the ideal ‘I’ and ideal ego, they recognise their image as both ‘me’ and not ‘me’, both themselves and different – a split in recognition that forms both the basis of alienation and at the same time pushes them to grow. The mirror-phase offers both self-recognition coupled with misrecognition and self fragmentation – it is not about the mirror as a reflection of the self but about the mirror as the constitutional element in the construction of the self. (Sturken and Cartwright (2009: 101, 212, 449)

For Chandler the mirror-phase is the defining moment of the Imaginary – the private, psychic realm where the construction of the self is initiated by visual images reflected back by an other with whom we identify. We see our mirror image and this induces a strong, defined illusion of a coherent and self governing personal identity. This also marks the child’s emergence from a matriarchal state of nature to a patriarchal order of culture. (Chandler, 2008: 93)

Eagleton states that we both recognise and identify with our mirror reflection (it is part of ourselves) and also find it alien (not ourselves.) Therefore, the image the child sees in the mirror is an alienated one – a misrecognition that is a pleasing unity not experienced in their own body. Lacan sees the Imaginary as a realm of images where we make identifications but also misconceive and misrecognise ourselves through this very act. As a child grows they continue to make such imaginary identifications continuing to build their ego which Lacan sees as the narcissistic process whereby we bolster a fictive sense of selfhood by finding something in he world with which we can identify. (Eagleton, 1996: 142-3)

Lacan was associated with the Surrealist movement. Find two examples of Surrealist work that might have echoes of the mirror phase and annotate them to show how.

My selections here are from painters associated with surrealism who have both produced work that literally features a mirror and appear to draw inspiration from the notion of the mirror-phase.

A woman sits in a room facing a mirror, however, her apparent reflection does not represent the scene in front of the mirror – it shows a naked with an outdoor scene behind her. The woman in the foreground with her back to us seems to be of wealthy means – she is wearing an expensive looking gown, her seat is ornate and padded which echoes the ornate gilt frame of the mirror she is facing. Strangely, the wall paper in the room in which she is seated is peeling and the ceiling seems in a state of disrepair, the floor is also bare floorboards. We assume the figure in the mirror is a reflection of the seated woman because her pose is the same, however, her nakedness indicates this is an imagined view we are witnessing. A small section of the room, the bare floorboards and peeling wall paper can be seen in the mirror and behind this is an outdoor scene showing a row of trees, one tree standing alone and to the side, and buildings in the background. This again appears to be imagined because the scene covers what appears to be the back wall of the room.

One reading of this scene could be that the reflected image is the woman’s idealised or unconscious view of herself. If we do not take the poor condition of the room’s interior as literal this could represent her inner feelings towards the apparent trappings of her status in society – the dress she wears could also be a symbol of this so being naked could be either the freedom she longs for or the uninhibited way she views herself outside of the trappings of her life. Conversely, the decay of the room could represent the woman’s real life or mental state with the idealised reflection being her own incorrect perceptions. The lone tree in the background seems to be significant and could back up the notion of freedom or difference as it appears to be the same as the others in the row and yet stands apart. This could represent the woman – on the surface the same as anyone else, and yet underneath different and separate. The lack of clothing could merely be a metaphor for the masks of conformity that we use to comply with societal convention.

A woman is shown holding a large mirror over her torso – she appears to be naked. She is standing straight on, the mirror covers from the top of her legs to her head which is tilted down and to the side, her eyes are closed. The reflection in the mirror appears to be of the same woman because the style and colour of her hair and skin tone matches. Clearly this cannot be the case however, a fact that is driven home by the body in the reflection standing at a different angle and being a different perspective. The figure in the mirror is standing to the side with buttocks facing the viewer, one breast is visible with the arms held underneath across the chest.

It is interesting that both artists here have chosen to represent female nudity in their paintings – as men do they have the right to explore notions of the female sexual subconscious? It is true that the female nude is an established artistic convention but to extend this objectification to female inner thoughts seems to be somewhat presumptuous.

Find two examples of the way the contemporary  media  make  use  of  Lacan’s ideas and show how.

Willamson (1995) makes some interesting observations about Lacan’s notion if the mirror-phase and how this relates to advertising. She states that advertisements alienate our identity in constituting us as one of the objects in an exchange that we ourselves must make, thereby appropriating form us an image which gives us back our own ‘value’. Advertisements dangle before us an image of an Other; but invite us to be the Same. This capitalizes on our regressive tendency toward the Ego-ideal.

I have chosen two advertisements which deal with body image in very different ways: 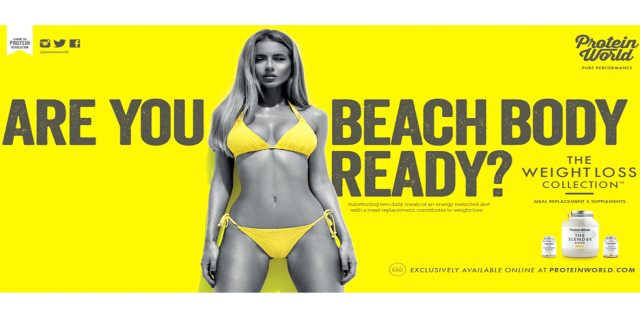 This advertisement for Protein World weight loss powder caused controversy because of its depiction of what critics saw as an unrealistic and potentially damaging projection of unrealistic body image. The advert invites the viewer to identify recognise the representation of the ideal physique, slim and toned,  as something attainable through the use of the advertised weight loss product. The further connotation is that this type of physique is the only body type that is acceptable for wearing beach wear, anything else being inferior. What we recognise is a reflection of our imperfections rather than the ideal which is represented – the aim being that we use the advertised product as a way of achieving this. Although complaints to the UK advertising watchdog deemed that the advert did not violate advertising guidelines it was met with much criticism in both the press and more directly by members of the public with billboards being vandalised on the London underground and in New York.

This still from an advert to promote awareness of eating disorders (available at: https://www.youtube.com/watch?v=xJuAGbsPu4w) is a powerful take on how the self can be distorted in a negative way. The ad depicts a teenage girl in her underwear looking at herself in the mirror. She is of typical body shape and by no means overweight yet focusses on what she her believes to be imperfections, at one point pulling at her side which is more like skin than fat. At the end of the advert, the camera pulls back and shows a painfully thin girl from the back. We are confronted with the fact that the images we have been viewing are the girl’s perception of herself rather than reality – the final shot shown here of the thin and normal girl together powerfully demonstrates how our view of self can be perverted into a negative and destructive one rather than ideal.

I have made a conscious effort here to gain the information I need for the project rather than getting obsessed with too much detail. For example, looking at the mirror-phase could easily open up into something much broader…self, other, ego, id, superego, the gaze etc. etc. Some of this I note are topics to be studied in further exercises.

I started doing quite a bit of reading about surrealism before also stopping myself and trying the approach of looking at works and making selections based on what seemed to fit the topic of the mirror-phase. This proved more difficult than I thought as the general art history books I own did not really have what I wanted and a google image search resulted in a great deal of results – many of which where not relevant. I always look at present and past student blogs when working on a project, and on this occasion found the images I eventually chose via former UVC student Keith Greenough: https://keithguvc.wordpress.com/2012/09/27/project-the-mirror-phase/ I did have a number of other images that I considered including but kept coming back to these as they seemed to encapsulate what I understood by the mirror-phase. I have asked for some support from art history students via the OCA student forum with recommendations of websites and books they use for general art history research. The advise gained here will hopefully help with subsequent projects.